Here is an introduction to the concept of Dry Days. Dry days in cities are considered to be a great deal. You might want to consume liquor that day, or you might have a small house party on that day or who knows you might also crave for liquor.

According to the latest survey conducted by AIIMS (All India Institute of Medical Sciences) and ISI (Indian Statistical Institute), Delhi citizens consume 5 lac liters of alcohol worth 6 crores every month. Therefore, Delhi is said to have more alcohol consumption than the other metropolitan cities.

Dry Days in Delhi can spoil all the plans you have for the party because Delhi is one of the party capitals in India. It is better for you to know the dry days in Delhi to make plans, invite friends, buy and store alcohol and party accordingly. To know everything about dry days in Delhi for the year 2020, read below.

What is a Dry Day?

A dry day is a day where people of a particular region would not buy, sell or consume alcohol. The sales of alcohol are banned during the day. The ban applies to Government liquor shops also.

These days are generally the national holidays. Dry days are also announced during elections and other important days like festivals. These days are not just observed in India, they are also observed in other countries as well, just that, they are not exactly termed as dry days.

For example, in Norway, you cannot buy alcohol on Sundays, except in bars. In a couple of countries like Afghanistan, Bahrain, Bangladesh, Brunei, Iran, Saudi Arabia, they either do not sell liquor for foreigners or limit the quantity of sale.

Why is there a Dry Day?

As all religions must be treated equally, even when it comes to dry days. And the commitment made towards prohibition under the directive principles of state policy must be given to each of them in a similar manner. The next reason is that the Alcohol trade shuts down on election days, which happens a bit frequently.

Mahatma Gandhi was the one who wanted a total prohibition or a ban on alcohol in India. Article 47 of the Constitution says: ‘The state shall regard the raising of the level of nutrition and standard of living of its people as among its primary duties and in particular, the state shall endeavor to bring about prohibition of the use except for medicinal purposes of intoxicating drinks and of drugs which are injurious to health.’

The symbolic push for prohibition has been so strong that October 2 is not just a dry day in India, but has been recognized as World No Alcohol Day since 2008. People could not totally restrict themselves from alcohol, so they promised that they can be without drinking on national holidays and other important days. That is how Dry Day came into existence.

The World Health Organisation conducted a survey, according to which, India is one of the fastest-growing markets for alcohol and other alcoholic beverages. Restrictive policies at the federal and state levels are often carried out under the concern that alcoholic beverages should be heavily regulated to prevent public health and safety issues related to drinking.

There are four different types of dry days on which there is a complete ban on alcohol. People never consume or buy alcohol on those days, except for some who might get psychologically triggered on the word ‘Ban’ and would want to go against it. Here are the types:

These are the types of days where you restrict the sale and consumption of alcohol. There are some states who have a liquor ban in almost all parts of the states. Gujarat, Lakshadeep, Manipur, Nagaland, Bihar are some of them. 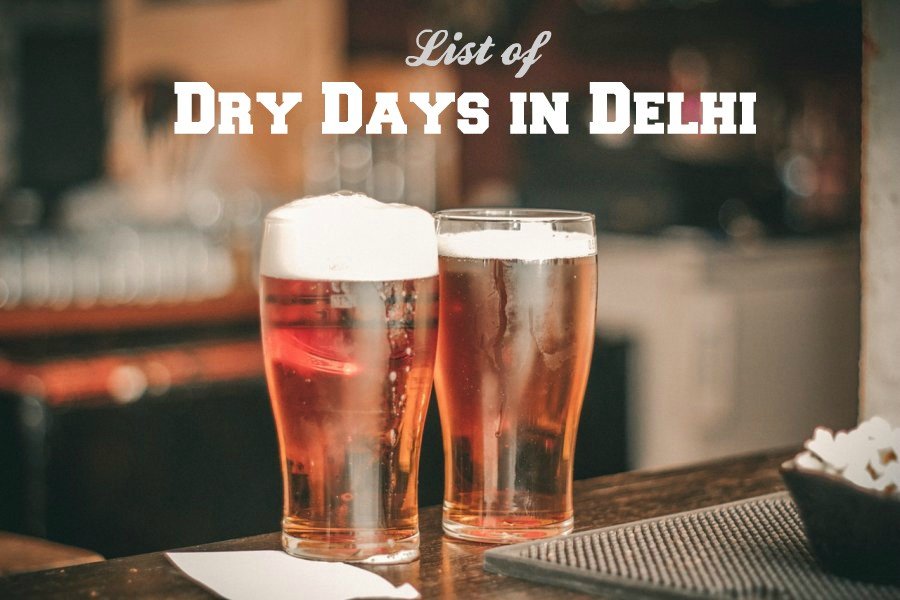 Here is the list of dry days that are followed in Delhi, for the year 2020. It is important to know these days for various reasons and stocking alcohol before the Dry Days might be one of them.

The Legal Age for Consumption of Alcohol in India

It is very much necessary that you make sure you are allowed to consume alcohol for your age. There are reasons like your body cannot sustain much alcohol until you attain a particular age. In India, different states restrict different sets of age groups from certain types of alcohol.

States like Chandigarh, Delhi, Haryana, and Punjab allows people to drink only when they are 25 years of age. You can consume beer if you are 21 and you must be 25 years old to consume other types of alcohol in Maharashtra. In Kerala, you can consume alcohol only when you are 23 years old.

Goa which is called India’s party central, allows you to drink when you are 18 years old, which is the lowest legal drinking age. The same applies to Nicobar Islands, Himachal Pradesh, Jammu and Kashmir, Karnataka, Puducherry, Rajasthan, and Sikkim.

But generally, In India, the legal age to consume alcohol is 21 years.

Before going to the Bar or hitting a pub, it is very important that you carry your identification with you. It serves several reasons. You must carry your ID when you drink for the first time, in case of emergencies.

Consuming alcohol is not a mistake, but getting addicted to it is harmful. Also, the dry days are one of the best initiatives, because it helps people not totally restrict themselves from alcohol as well it shows how important it is to not consume alcohol as a gesture of respect on certain days of the year. It also teaches us the limits. There is nothing wrong with following the plan and remaining a non-alcoholic during these days.

This website uses cookies to improve your experience while you navigate through the website. Out of these, the cookies that are categorized as necessary are stored on your browser as they are essential for the working of basic functionalities of the website. We also use third-party cookies that help us analyze and understand how you use this website. These cookies will be stored in your browser only with your consent. You also have the option to opt-out of these cookies. But opting out of some of these cookies may affect your browsing experience.
Necessary Always Enabled

Any cookies that may not be particularly necessary for the website to function and is used specifically to collect user personal data via analytics, ads, other embedded contents are termed as non-necessary cookies. It is mandatory to procure user consent prior to running these cookies on your website.