Samoan currency is the Tala (WST), and its popular symbol is the W$. To distinguish itself from neighboring states, this independent state chose this sign for its currency. 100 Sene make the Tala. Sene, in English, is cents while Tala is dollars.

This currency was first introduced for use in Samoa in 1967 after Samoa got its independence from New Zealand.

The WST is issued and regulated by the central bank of Samoa. It’s the role of the central bank to ensure that the exchange rate of the Tala against other international currencies is properly managed.

Also, the central bank helps to supervise the operations of all commercial banks and other financial services providers that operate in Samoa.

Before Samoa got its independence from Samoa, this country was using banknotes of the republic of New Zealand. However, after five years of independence, the Bank of Western Samoa started issuing its banknotes and stopped using the New Zealand notes. These banknotes were named Tala, and in English, this can be translated to mean dollar.

For several years after being introduced into the market, this currency was pegged on the New Zealand dollar, but after 1975, this changed. The exchange rate of the Samoan dollar was pegged on demand and supply, and that has been the case until now. 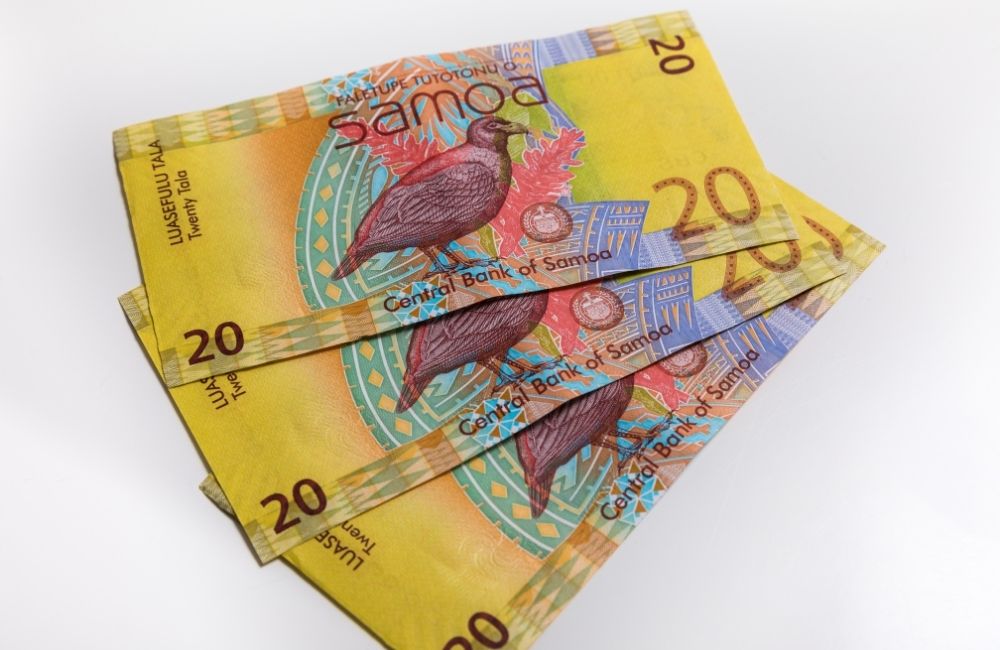 The formation of the central bank of Samoa

In 1985, the central bank of Samoa was formed to replace the bank of Western Samoa. Five years after its formation, Samoa’s central bank issued new Tala bills of 50 and 100, respectively. Today, these banknotes carry icons and notable locations that have been picked from all over Samoa.

Moreover, there are one and two Tala coins, as well as others that are 10, 20, and 50 sene. However, in 2011, Samoa’s central bank re-issued these coins but with some new images on them. These coins are of smaller size and have new shapes. All these helped to reduce the production costs of the coins. The most common paper notes include 100, 50, 20,10,5, and 2 Talas.

For those traveling to Samoa, credit cards are accepted in most resorts, restaurants, and departmental stores. However, it’s advisable to carry some hard cash just in case.

Samoan tala is a strong currency that is worth investing in. The economy is stable and growing, so the tala is likely to remain a valuable currency.

The tala is a strong currency and has been stable in recent years. There are many ATMs throughout Samoa, making it easy to access your money. So if you’re traveling to or living in Samoa, be sure to familiarize yourself with the tala!