Characters in Mr. Robot have different zones where they try to stand out in order to tell their stories. Each of them has their own problems, which they convey to the viewer through dialogue. You will find here a collection of top Mr. Robot quotes that teach us about love, loneliness, and society.

World catastrophes like this, they aren’t caused by lone wolves like you. They occur because men like me allow them. You just had to stumble onto one of them. – Philip Price

In season three, Phillip Price said this quote. Quotes like this illustrate how hopeless people are. It is our society that has to deal with the aftermath of a few mishaps caused by a few of its members.

When you delete something, you’re making a choice to destroy it. To never see it again. you choose to delete because you need to free up space. because you don’t want it anymore. because it no longer holds value. is that what happened to Mobley and Trenton? Were they unwanted? Taking up too much space? – Elliot Alderson

This quote, which comes from the third season’s sixth episode, mentions the “rulers” of society. Some leaders in the real world try to make their own profit instead of working for the good of the community. 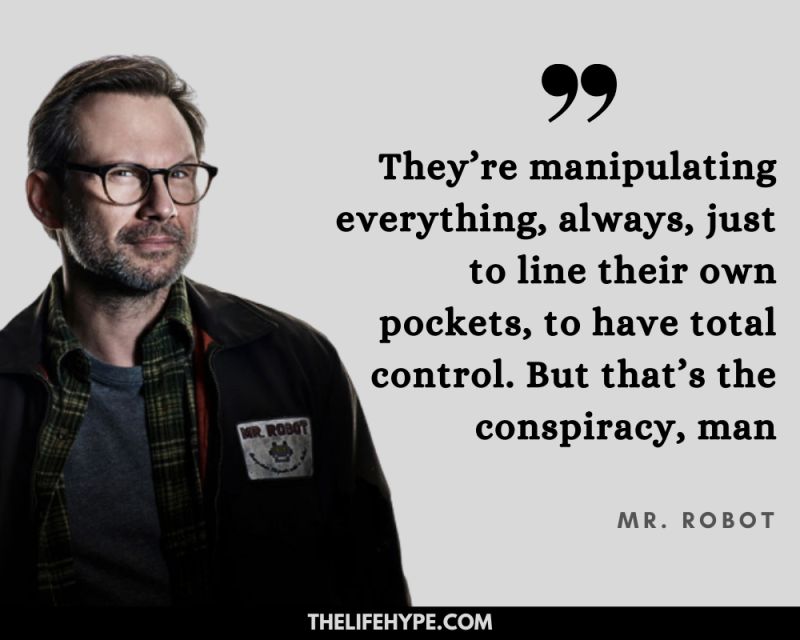 This quote is from the sixth episode of the third season clearly talks about the “rulers” of the society. In the real world, too, some leaders try to work for their own profit rather than charity. 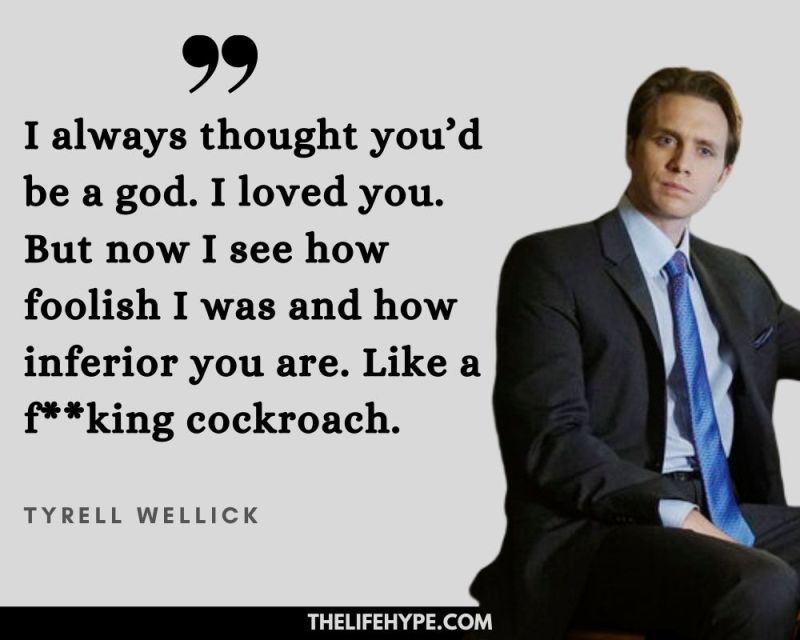 A quote mentions how far one can go in showing love and compassion. In addition, it illustrates how the same love can turn into hatred for a person.

I’m gonna fix the world I broke and put it back together better than it was before. – Elliot Alderson

This quote empowers the audience and paints an optimistic picture of few leaders who want to take responsibility for their mistakes and fix the damage. 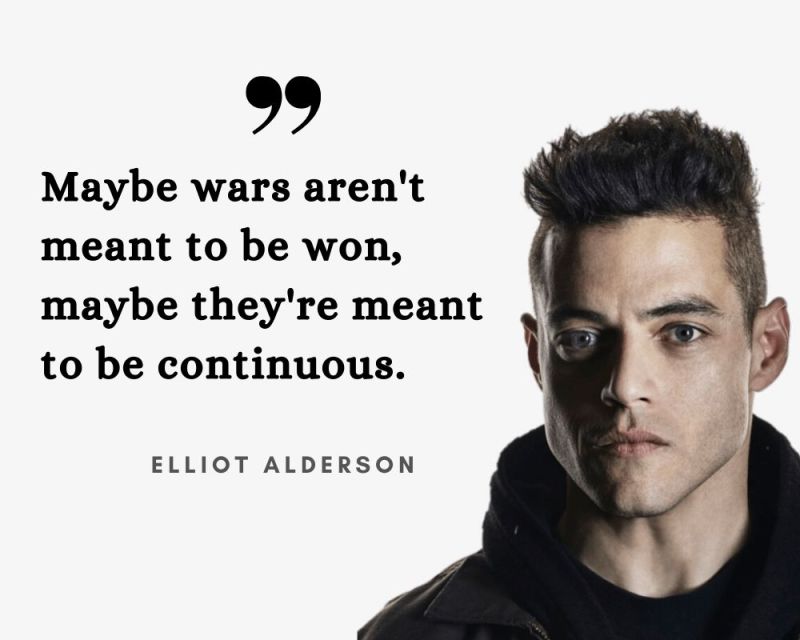 With this quote, the true motives behind a fight are revealed. Not only does this apply to society, but it also plays a significant role in daily life. It’s never about the end result, but the journey that matters and the struggle that never ends.

7. When everything involves power

Every relationship is a power struggle. Some of us need to be controlled. – Elliot Alderson

Relationships can be difficult to maintain, and many people have trouble making them work. The need for control is essential, not just to control hatred but also to control love.

Politics is for puppets. – Philip Price

The quote came from Philip Price during season two. Rather, it refers to the idea of introducing political dynamics to sections of society that are not necessarily politically oriented. This also shows how those who lack control over their actions (the puppets) control politics.

9. A world to escape 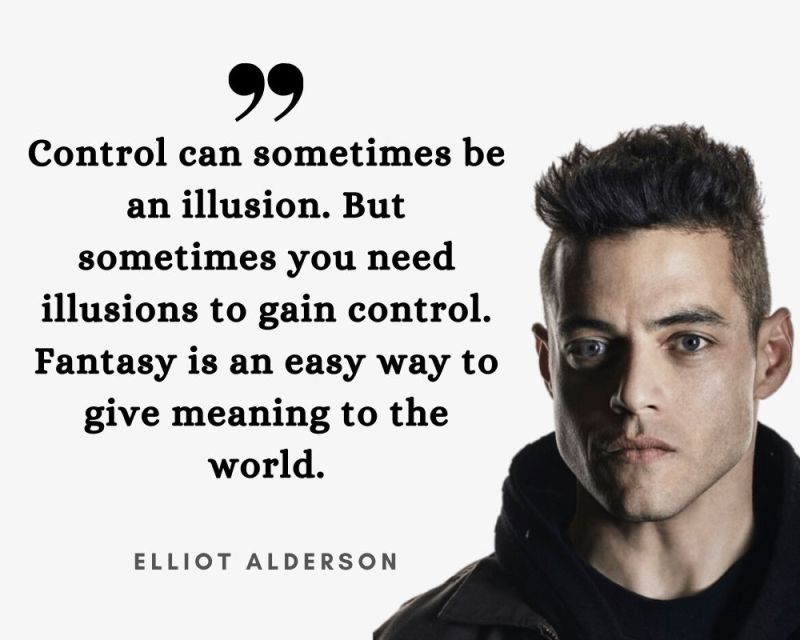 According to the quote, people try to restrict themselves on a screen by avoiding life’s realities. An individual might need fantasies in order to escape a challenging situation. 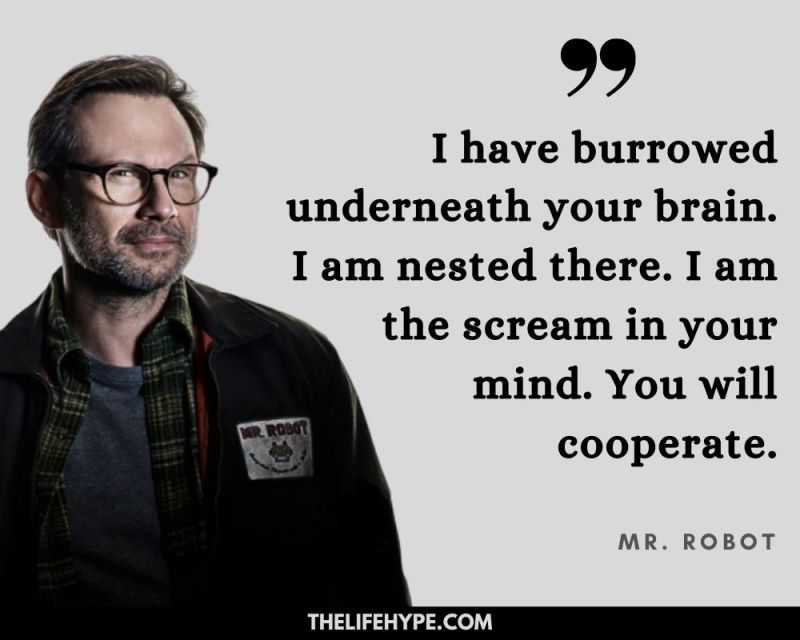 Having control over something is a very powerful thing. People of society become controlled by it and their actions are directed by it.

Why do they fight so desperately to mask what they are? Or is it that they become who they are when they put on the mask? – Elliot Alderson

In society, many people hide their true emotions behind masks. An episode from season 2 shows Elliot Alderson trying to explain the fine line between order and chaos. There is something different about this character because he does not wear a mask.

Repeating the same tasks each day without ever having to think about them, isn’t that what everybody does? Keep things on repeat to go along with their NCISes and Lexapro. Isn’t that where it’s comfortable? In the sameness? – Elliot Alderson

There is a question of staying with the routine. Is it possible to be happy if you follow the same orders every day? What kind of preparation can a person expect from a person undergoing a change?

We’re all living in each other’s paranoia. – Elliot Alderson

The quote is from the seventh episode of Elliott’s first season. A person in a society is dependent on each other and our actions are based on how we think others will react.

This is the world we live in. People relying on each other’s mistakes to manipulate one another and use one another, even relate to one another. A warm, messy circle of humanity. – Elliot Alderson

This quote is a reflection of the people’s reality. The game they play is based on faking intimacy. By manipulating others, people take advantage of their mistakes. 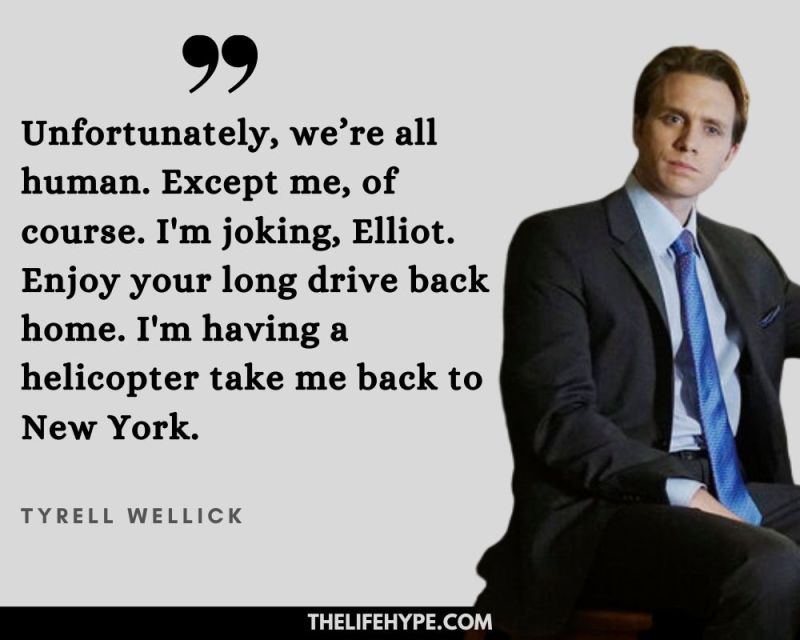 A machine is different from a human as it lacks emotions, and it does as it is ordered, unlike humans who adopt actions based on opinions and experience.

16. Change the world for good

Every day, we change the world, but to change the world in a way that means anything, that takes more time than most people have. It never happens all at once. It’s slow. It’s methodical, it’s exhausting. We don’t all have the stomach for it. – Elliot Alderson

According to the quote, changing the world is the only way to improve it. Changing the mindset of people in society requires a great deal of time. People will always have the tendency to reject what is good and right. 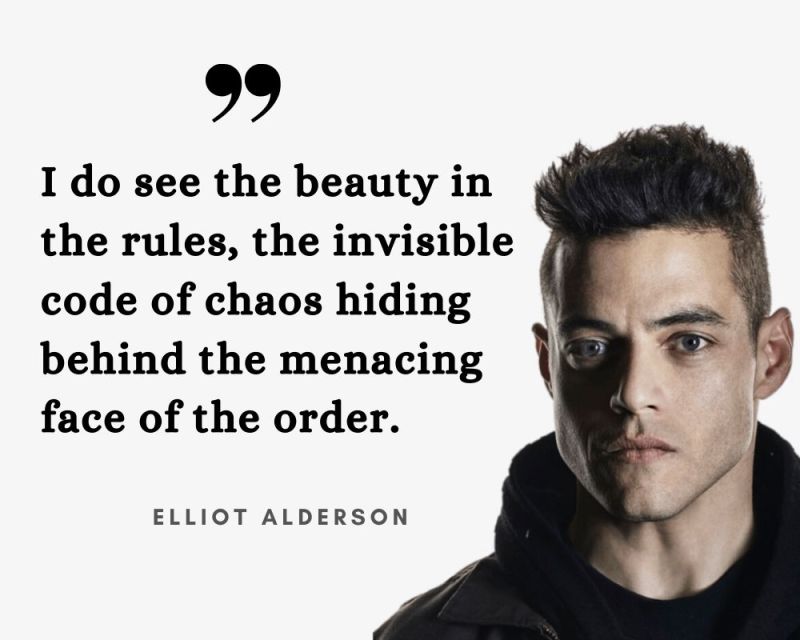 Elliot Anderson appreciates the presence of rules and the orders of life. Behind each of these threatening orders lies chaos. 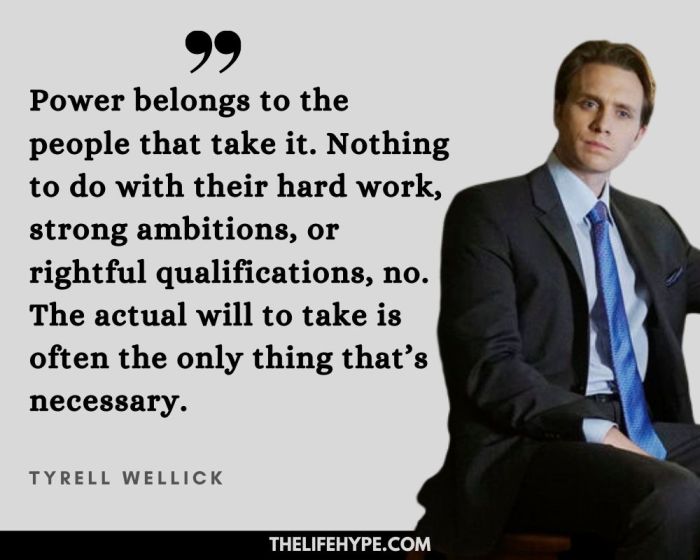 Those who actually believe in themselves and have the courage to take control in life have the ability to handle the powers given to them, unlike those who do not.

I’ve never found it hard to hack most people. If you listen to them, watch them, their vulnerabilities are like a neon sign screwed into their heads. – Elliot Alderson

The quote talks about how it is so easy to rule over people and control them through hacking. It is just a simple game of analyzing the vulnerabilities.

So this is what a revolution looks like, people in expensive clothing running around. Not how I pictured it. – Elliot Alderson

The quote brings out the irony in the behavior of revolution. How the way to demand a change in society has not changed itself over the years.

A bug is never just a mistake. It represents something bigger. An error of thinking. That makes you who you are. – Elliot Alderson

A computer code can be compared to the rules a person follows in life. Bugs in a code and the wrong thoughts in a person’s mind create who they are. Among the favorite quotes from Mr. Robot, this is one of the best. 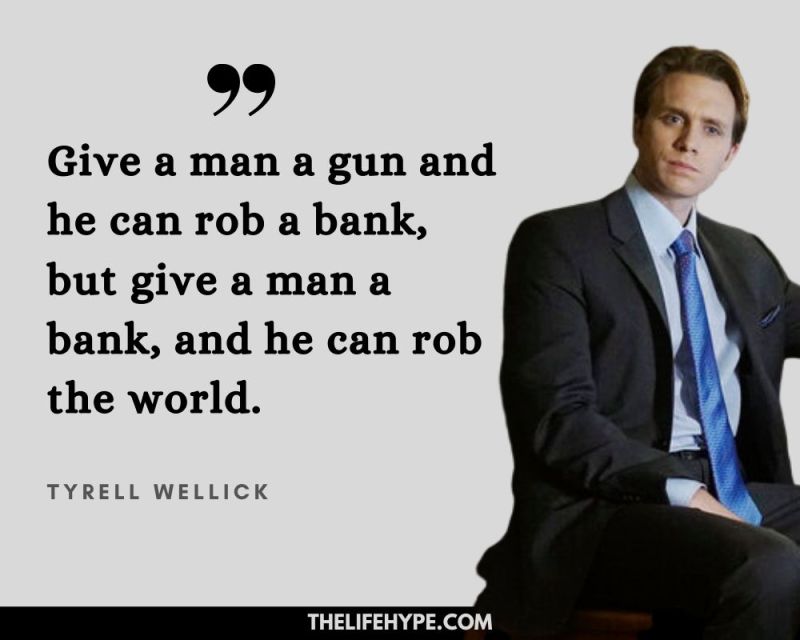 Wellick’s quote holds so much truth. A man with a gun has limited power, but a man with great authority and power has no limits. Society’s leaders, who wield foundational power, are trusted by the public.

I’m good at reading people. My secret, I look for the worst in them. – Elliot Alderson

When it comes to reading someone, the best way is not to look at how they behave, but to look at the worst aspects of who they are. During the first episode of season 1, Elliott says this quote. 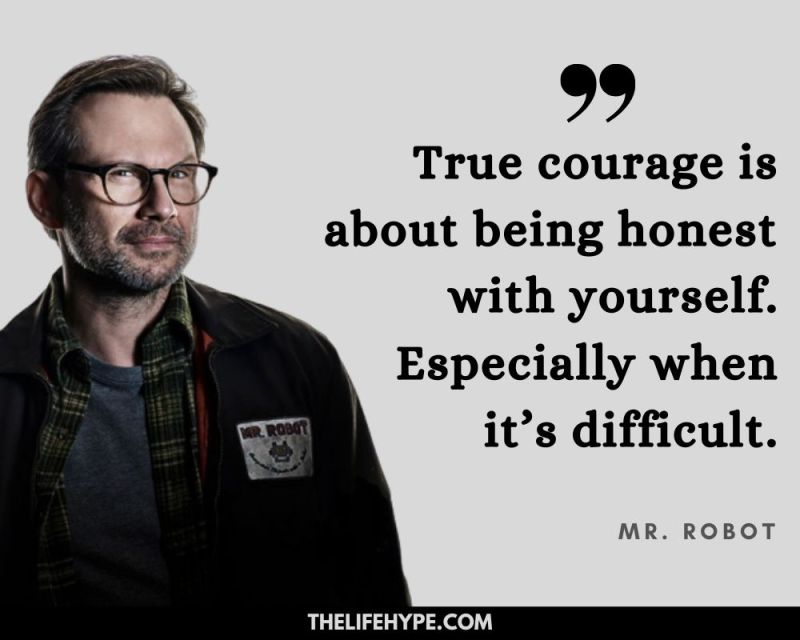 The real fight in life is always with ourselves. We are going to succeed as long as we remain true to ourselves, even in the most challenging situations.

Life is so much easier when you’re numb. – Elliot Alderson

This is one of the best Mr. Robot quotes. A certain stage of life involves becoming emotionally numb until that moment no longer affects a person. When you are numb, everything seems simpler.

Control is about as real as a one-legged unicorn taking a leak at the end of a double rainbow. – Ray

Ray quotes this to Elliot in episode number 3 of season 2. Control is a purely fictitious concept. It is only in our heads. There is no control over anything.

The devil’s at his strongest while we’re looking the other way, like a program running in the background silently, while we’re busy doing other shit. – Elliot Alderson

When no one is paying attention, a devil has the most power. In life, we need to sort things out with our devils so that they do not have the power to ruin us. 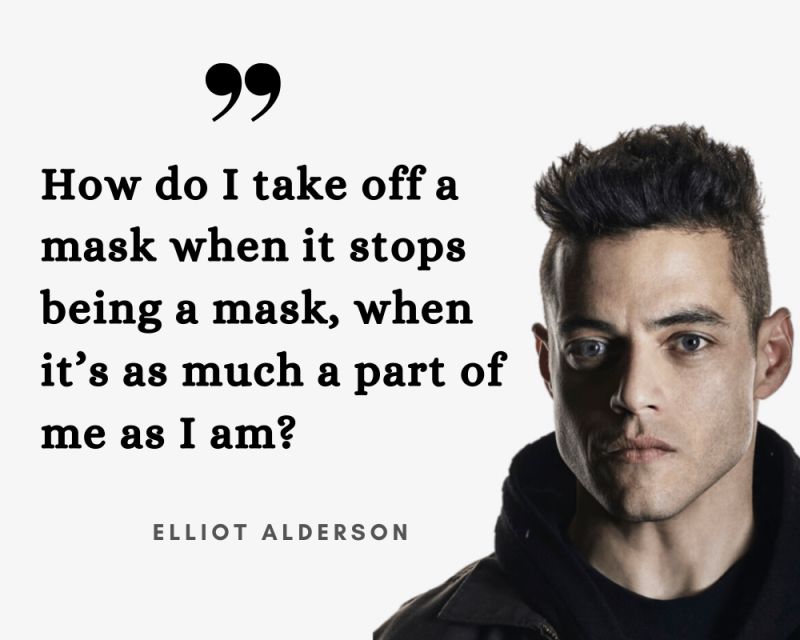 How do I take off a mask when it stops being a mask, when it’s as much a part of me as I am? – Elliot Alderson

One cannot tell what a person really is from the mask he wears, and often gets confused with what that person actually is.

People tend to pretend they are not scared and try to hide their feelings while pretending they are strong. This makes us no different from the small animals.

What’s the Hype around Mr. Robot?

Viewers were breathless when Sam Esmail’s new USA series premiered on Netflix. 2015 was the year when the series was born. Several viewers were thrilled with the final season as well, and it seemed as if the writers gave meaning to the ending.

Although the series has ended, the buzz continues. The makers of the series have done a phenomenal job writing the plots for the series. The show initially appears to be technical and geeky. Although, the show’s writers have tried to give the show a deeper meaning, rather than just focusing on technology.

As a coder, Sam, Esmail tried to make the show’s details very clear, so it appeared real to the viewers.

There is more to Mr. Robot than just technology and hacking. Through the characters, it shows the reality of life and allows them to communicate the message to the audience. These Mr. Robot quotes help the audience develop a strong opinion about different spheres of life, such as love, loneliness, and the society we live in. The characters put on the quotes in front of us in such a manner that they hit us differently.