When it is so easy to be a two-faced person and play well with those two faces, it is difficult to recognize another’s true character or personality, and in many cases, it’s already too late.

Keeping this in mind, we’ll tell you how to identify someone’s true character and help you deal with this problem. 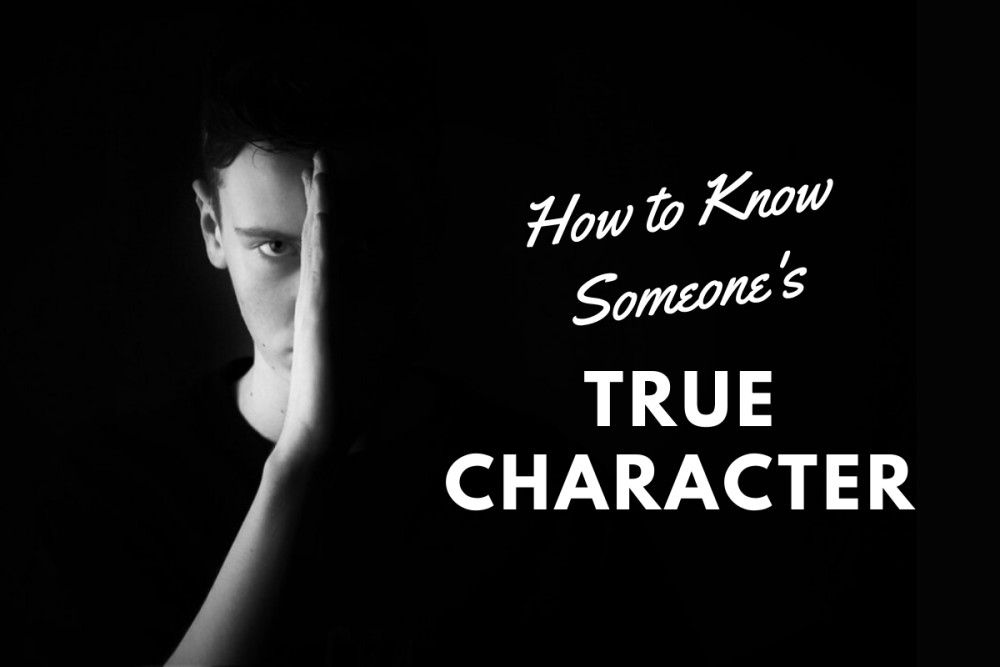 What is a Person’s Character?

There is something about a person’s character that describes his or her whole vibe and aura.

There is no definition of character. Whether positive or negative, character traits are constants and are not influenced by circumstances.

Character distinguishes one person from another. We can say that an individual is tolerant because it is a quality of their overall character. A person’s individual nature is a combination of features and traits.

Our first impressions of someone can easily be deceiving. Usually, the first time a person meets or is exposed publicly, the person keeps themselves in check. It is only later that we begin to understand a person’s true character – whether good or bad.

Here are some ways to recognize a person’s true character:

Modest people keep themselves within limits and don’t go too far out of their way to grab attention. Subtle people exhibit good character and are modest. The way they speak, how they dress, etc., shows their modesty.

Reliability is a sign of a good character. In times of crisis or when things are not going well, one can rely on them. We know we can’t rely on such a person if they back out. When everything is going well, a person can be just as good with you, but if they remain the same even in the darkest times, they are reliable.

#3. Are they capable of taking the blame?

It takes courage and honesty for someone to admit their mistakes and accept responsibility. Instead of playing the blame game and pointing fingers at someone else, a good person owns up to their own mistakes.

A person who is truthful about things is generally good. It may seem cliché, but being honest is generally a great thing. A righteous person is always honest, no matter what. When they speak the truth, they don’t keep another person in the dark.

#5. Do they discuss other people?

If someone gossip and backbites about other people in front of you, they surely gossip about you when you are not present. You cannot trust such persons.

Someone who gossips and backbites about other people in front of you surely will do the same about you when you are not there. Such individuals are untrustworthy.

I would like to extend what I said previously. Whenever someone brags too much, he is trying to make you feel less than you are. They want you to doubt yourself and feel underconfident.  People with such a character are likely to be negative.

#8. A person of good quality will radiate confidence wherever they go

They are confident in themselves, and they don’t need approval from others. It does not mean that they aren’t modest – they are just pretty confident in a good way.

The ability to accept another’s culture, perspective, and beliefs constitutes tolerance. No two people can inevitably think the same way about everything. Conflict is inevitable, but how one responds to that conflict defines their personality.

Keep your distance from people who are short-tempered and domineering.

#11. Thinks before they speak

It’s not good to be around anyone who does not think about the feelings and emotions of others. Don’t confuse it with honesty, however. As there is a way, to be honest, it is important to remember the words and feelings of others.

Humanity comes from kindness. See how they treat restaurant staff, older adults, children, and animals. It tells a lot about a person’s character.

You can say a lot about a person’s character or true character by observing their use of language. Whether the person uses foul language or a subtle and classy tone, we know which one is of good character.

A human is destined to face failures at least once in her or his life, and often uncountable ones. Despite failures, a person’s perseverance makes him a real person, and his desire to continue towards the goal makes him a positive person.

We all have a friend or someone we know who brightens up every occasion with their sense of humor, and we enjoy being around such people since they lighten up the situation and things don’t seem as heavy.

Respect is reciprocated when it is given – that’s all there is to it. Being a good person means being respectful even if you don’t expect anything in return.

#17. Conduct towards the family

A well-behaved person respects and loves his family knows the value of relationships, and such people are good.

#18. They have long-term relationships

Because toxic individuals radiate negativity, they cannot retain relationships, resulting in short-term relationships, whether it’s with loved ones or friends.

Character is one of the most important factors to check. Patient and calm people are a pleasure to be around.

#20. The reaction of the person

When they get a chance to do something immoral or unreasonable, do they do it without hesitation, or do they question the grounds and stand against it? Their reaction decides his trait.

A person of good character can also say no when they are unable to do something. It’s not rudeness but honesty.

A person of good character can also say no when they are unable to do something. It’s not rudeness but honesty.

In addition to being hard workers, they are also smart workers. Their dedication and passion for what they do are evident.  If the person does this, it suggests that they are serious and are not overly casual.

If you feel that a person’s behavior is dragging you down from your goal, or in some way, you don’t feel supported, then that is a negative trait.

Whenever you are around someone who is constantly complaining about their work, friends, partner, boss, or overall life, you will automatically feel repelled by them. It’s not a sign of a good character. A person with such an attitude is certainly hopeless and lacking in optimism.

#26. Do they carry themselves well?

Taking care of one’s appearance plays an important role in one’s personality. Well-groomed people have a positive aura and show confidence. Taking care of oneself is a sign of responsibility.

In other words, they are called narcissists. They have no concern for others. They only care about themselves. Even on simple occasions, one can notice this trait. When ordering food, they will not even bother to ask if you need anything.

People who get jealous easily are not good. No one can avoid being jealous or envious, but when this jealousy gets so out of hand that a person does anything adverse to the other person, things go wrong. However, little jealousy is good for healthy competition.

People who don’t stand for what is right are wrong, according to a saying. As long as they stand up for the right and speak for the oppressed, they seem to have a positive vibe, positive energy, and overall a positive character.

The characteristics of a person’s true character aren’t revealed solely by one or a few of them. These traits make up a person’s character. Humans cannot be perfect, but they shouldn’t be toxic, and if you feel negativity around a person, it’s time to distance yourself from them.