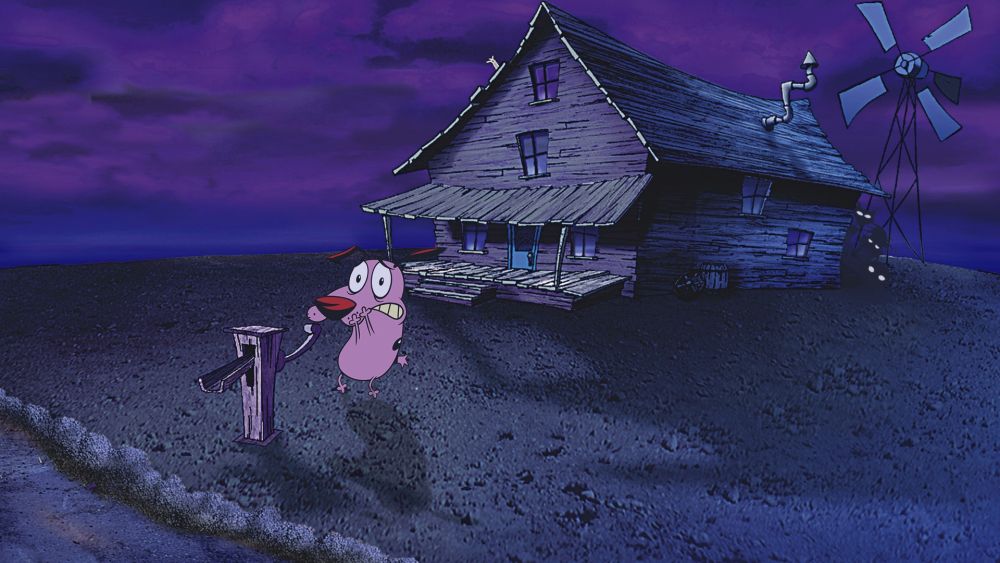 Courage the Cowardly Dog story is all about a puppy that undergoes many adventures. Courage, the puppy, was adopted by an old lady named Muriel. Courage’s parents were used for experiments by an evil veterinarian. From there, somehow, by God’s grace, courage escapes and finally connected with the old lady Muriel along with her husband, Eustace. However, her husband treated courage as a slave, besides the old lady treated courage as one of the family members.

The house they stayed in was the lonely and middle part of nowhere, and aliens prefer that place as their landing place. The aliens often visit the place and try to take the old lady and her husband for their experiment. Being faithful to the old lady, courage had never given up to protect the two from the aliens.

Thus the adventures of courage were taken into fascinating series. Courage is a brilliant dog that could identify the aliens even when they disguise them as humans and try to fool the two.

Wondering about courage and his adventures, here are the best episodes of Courage the Cowardly Dog. You can watch them just here through YouTube!

In this episode, Courage discovers an ancient Egyptian slab near their farmhouse, and courage shows it to Eustace. Eustace rejects it, and later, he comes to know about the value of the slab. The slab belongs to King Ramses, who is already dead. The slab was stolen from the tomb of King Ramses.

Hence the ghost of king Ramses visits Eustace’s house and gives the warning to return the slab or else Eustace will be cursed with three plagues. Here comes how courage helps Eustace to get rid of the plagues, and how the problem is solved is shown in the fantastic play.

Queen of the black puddle

This is an amazing episode of Courage the Cowardly Dog. Yes, this episode revolves around a bizarre woman who lived inside a puddle. Eustace uses to visit the puddle, and one fine morning he will not be found anywhere. Courage knowing that this was the mysterious queen’s idea, dive into that puddle and rescue his master. The way he saves his master will be simply amazing.

A Night at the Katz Motel

This is the first episode of the first season and also a fantastic start. As the title says, it’s a night, and the old couple with their dog will get stuck in a storm at midnight. There they will find a motel named Katz and decides to stay for that night. After they settle in the motel, that late-night numerous spiders will appear and try to eat them. Courage will find a solution to rescue them, and the old lady will drive away from the motel with her husband and her dog.

Remembrance of Courage Past

This episode says about the past life of courage, i.e., how his parents were lost in space by an evil veterinarian. He will be taken to the same doctor, and that evil doctor will again plan for the same experiment. Somehow courage will escape from there, but unfortunately, his owners will be caught by him. The brave dog traps for the doctor and releases his owners. Finally, the doctor will be burst into space, and thus the courage gets satisfied then.

The Demon in the Mattress

The Demon in the Mattress is the fourth episode of season one. This is all about the dangerous mattress bought by courage’s owner, the old lady Muriel. The mattress emits poisons’ vapors, i.e., the demon, and causes the old lady to levitate. As usual, courage knowing the strange happening trying to rescue his owner by performing an exorcism, and finally, the mattress will be taken back by the deliveryman.

Courage in the Big Stinkin’ City

This episode revolves around the family who goes to New York to perform a music contest. Courage finds a lot of issues and scary building. This says how they are returning from New York safe to their native.

A masked woman will attack the courage and threaten that she will kill courage’s owners if courage is not helping her solve her problem. With a pretty plan, courage will escape from this tragedy.

The Last of the Starmakers

This episode will tell about a female Starmaker with her eggs at the courage family house and the tragedy they face. Finally, the eggs get hatched and will end with a super climax.

This episode is all about the Freaky Fred. Muriel was his aunt, and he once visited her house. Freaky Fred will shave the fur of courage due to his past thoughts, and later, he will be taken by police.

The episode will tell about the struggles of courage due to his master. He will be trained by a perfectionist. The teacher will be visible only to courage. Her training will make courage finally a perfect dog.

However, each series of courage the cowardly dog episodes will always make everyone enjoy. The way courage figures out the evil and the strange coming towards his family is amazing and makes everyone sit back and look with curiosity. It also motivates everyone to learn some “courage” being a “coward.” Yes, of course, each individual will definitely get little courage and some good ideas towards each goal.

This website uses cookies to improve your experience while you navigate through the website. Out of these, the cookies that are categorized as necessary are stored on your browser as they are essential for the working of basic functionalities of the website. We also use third-party cookies that help us analyze and understand how you use this website. These cookies will be stored in your browser only with your consent. You also have the option to opt-out of these cookies. But opting out of some of these cookies may affect your browsing experience.
Necessary Always Enabled

Any cookies that may not be particularly necessary for the website to function and is used specifically to collect user personal data via analytics, ads, other embedded contents are termed as non-necessary cookies. It is mandatory to procure user consent prior to running these cookies on your website.

SAVE & ACCEPT
error: Content is protected !!
Scroll to Top